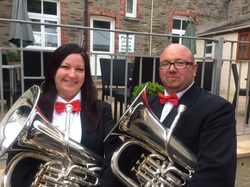 Building on success at the Area and Spring festival contests, Mount Charles Band are delighted to announce a new pairing in their euphonium section.

We would like to welcome Jackie Berry, who takes up the 2nd euphonium chair to the band.  Jackie has been playing for 35 years and has played with the Indian Queens, St Austell and most recently Bugle bands.

Taking up the principal euphonium chair is Jeremy Taylor.  Jeremy is returning to the band after a few months away and we are thrilled to have him back. Jeremy has also been playing in excess of 30 years and as a band we couldn’t be happier to have two such experienced players in the ranks.

Derek Thomas, Chairman says “I am delighted to see a return to the band after a short spell away of Jeremy, and also to welcome Jackie to the team.  They both bring a wealth of experience and plenty of enthusiasm”.